DC Universe Online Wiki
Register
Don't have an account?
Sign In
Advertisement
in: Fight for the Light, War of the Light Part II, Episode 16,
and 4 more 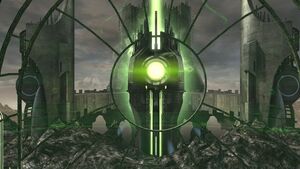 Oa is an ancient world, one of the oldest planets in the universe.

Formerly located at the center of the universe, Oa serves as the central headquarters and homeplanet of the Green Lantern Corps.

When the most powerful being in the Universe, the Monitor, was born on one of the moons of Oa, and became embroiled in a battle against his Antimatter analogue, the Anti-Monitor; who was born on Qward. Following a final battle between the two monitors that left both combatants comatose, the planet was left unoccupied until the arrival of the Maltusians.
Feeling responsible for the actions of Krona, whose unchecked curiosity was perceived to have caused the rending of the universe and the creation of the original Multiverse, the Maltusians relocated to the planet Oa and took up the responsibility of establishing and protecting the known universe as its guardians. Their goal was simple: combat evil and create an orderly universe.

As time progressed, the guardians established various corps to help enforce their will, their headquarters growing into a city; with it main focus being a Central Power Battery which powered the rings of the Guardians' current enforcers; the Green Lantern Corps.
When Green Lantern (Hal Jordan) was under the influence of the entity Parallax, the rogue Lantern attacked and drained Oa's Power Battery, killing all but one of the Guardians in the process and most of the Corps. What remained of Oa served as a base of operations for the villain Oblivion until the planet was reformed sometime later by Jordan's old friend and associate Tom "Pie-Face" Kalmaku.

The Central Power Battery is later recharged by Green Lantern (Kyle Rayner) and the Guardians, and the Corps, are resurrected shortly thereafter.
Following the Infinte Crisis, after attacks by Superboy-Prime and the Spider Guild, the Guardians fortify Oa by creating a planetwide armour and defensive system to prevent future attacks.