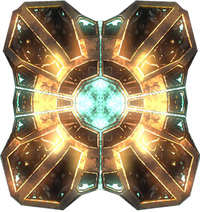 The New Gods are a race of extra-terrestrial immortals whose proximity to the Source Wall has bestowed them with god-like power.

Living outside of normal time and space in a realm called the "Fourth World", the New Gods are beings of genetic stability and evolutionary perfection. Possessing superior technology unseen anywhere else in the universe and celestial powers and abilities based on concepts that exist within reality, the New Gods of New Genesis and Apokolips are among the most powerful beings in current existence.

During the creation of existence and the Multiverse, a planet was formed around a star that was in close proximity to the Source and the Source Wall; a realm of energy that served as a physical barrier between the Multiversal universe and direct access to the Source itself. Called Urgund (or Godworld), the planet soon supported life and sentient humanoid life forms emerged.
Ages later, these humanoids began accessing the energies of the Source and became nigh-immortal beings with celestial power. This, along with their incredibly advanced technology, made them incredibly powerful and became known as the "Gods of Urgund" (referred to as the "Old Gods" in modern time). However, the gods soon entered into conflict with each other and split into two groups; the Old Gods of Order and the Old Gods of Chaos, turning their colossal power and advanced technology upon themselves. During their pursuit of war, the gods discovered a force that served as the anti-thesis of the Source. Dubbing the force "Anti-Life", they unleashed the energies upon their enemies without knowing of its full power and inadvertently destroyed themselves and their planet in a cataclysmic event that later became known as "the Ragnarök".
As the Anti-life energies destroyed Urgund, they spread outwards and consumed thousands of surrounding star systems before finally dissipating. With the exception of Urgund’s sun and the rubble of the planet itself, the entire sector was reduced to an empty space and was now surrounded by an energy envelope that placed it slightly out of phase with the rest of reality; rendering conventional travel to the sector now impossible. After the fall of the Old Gods, the universe was for a time ruled by the mysterious entities known as the Shadow Elements.

Eventually, the rubble of Urgund began to take shape again and formed into two planets. One was full of life and would be called New Genesis. The other was a desolate wasteland and would be called Apokolips. New life formed on both planets and they soon learned to access the same cosmic energies that their predecessors had. Soon after, they dubbed themselves "New Gods" in memory of the predecessors.
Moralistically divided, the people of New Genesis were led by Izaya the Highfather while the New Gods of Apokolips were eventually led by Darkseid the Destroyer. While not as militant as the Old Gods, the two sides fought from time to time due to Darkseid's wish to conquer and destroy all of creation.