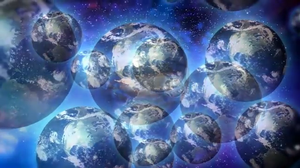 The Multiverse consists of parellel versions of the universe existing in the same physical space, but separated from each other by their vibrational resonances.

The Original Multiverse was created as the result of interference in the Big Bang by Krona. It was destroyed by the Crisis on Infinite Earths when, at the crisis' conclusion, all of the dimensions cascaded into one single dimension until an Interregnum Multiverse was created by Alexander Luthor during Infinite Crisis. After the events of Infinite Crisis, the remaining Earths created collapsed back together, combining historical remnants to form one New Earth. However, the single universe was too small to contain the energy inside it and it began replicating into 52 identical Universes, the 52 Multiverse. These alternate Earths were originally identical until the meddling of Mr Mind caused them to differ from each other in various ways.

The parallel realities were separated by an an interdimensional sub-reality barrier called The Bleed. The Bleed was also spatially connected with the Source Wall, the Multiversal Nexus and the Nanoverse. The Bleed was completely collapsed in the Final Crisis event by Nix Uotan.

Krona (a member of the ancient race that would be later known as Oans; masters and creators of the Green Lantern Corps) was a scientist obsessed with observing the creation of the universe, despite an Oan legend that said discovering that secret would cause a great calamity. Krona created a machine that allowed him to see into the moment of creation. Somehow, his experiment disrupted the process of creation, causing the creation of not a single universe, but the generation of an infinite number of universes.

From the perspective of the Earth-One universe, the first travel to another parallel universe occurred when Flash (Barry Allen) accidentally changed his vibrational frequency to match that of Earth-Two, where he met Flash (Jay Garrick). That meeting resulted in years of interaction between the Earth-Two superhero team, The Justice Society of America, and their Earth-One counterparts, The Justice League of America.

As Barry Allen was the first traveler, the honor of naming the two Earths fell to him - his universe's Earth was called Earth-One, Jay Garrick's became Earth-Two. As noted years later by Earth-Two's Superman, the JSA were too polite to mention that they were around first.


After Earth-Two, the next parallel world encountered by the JLA was that of Earth-Three, a partially "reversed" Earth populated by their evil "opposites", the Crime Syndicate of America. However the general populace of Earth-Three reflected a society based on laws and good values, despite the majority of their super powered beings having an evil nature. The Syndicate would eventually be imprisoned by the JLA and JSA, escaping at various times throughout the years to cause trouble.

It was eventually discovered that the Universes co-existed with an Antimatter Universe. These Universes were each overseen by a Monitor, however the Anti-Monitor, the Monitor of the Antimatter Universe, caused a wave of antimatter to sweep across the infinite universes in an effort to gain absolute power and remake existence to his liking. This crisis would become known as the Crisis on Infinite Earths.
The battle against the Antimonitor would continue until, with five universes remaining, the remaining heroes of the Multiverse, at the Spectre's urging, pooled their resources and traveled back to the Dawn of Time where they confronted the Anti-Monitor while the villains, meanwhile, traveled to Oa to try to stop Krona from peering back in time and creating the Multiverse.

Despite the heroes having arrived into a trap, the Spectre, aided by Earths' mightiest sorcerors, managed to defeat the Anti-Monitor. The histories and peoples of the remaining five universes (Earth-One, Earth-Two, Earth-Four, Earth-S, and Earth-X) were effectively merged to form one composite universe, the Post-Crisis Earth.

Years would pass until the forgotten survivors of the Crisis on Infinite Earths (Superman (Kal-L), Superboy Prime, Lois Lane (Earth Two) and Alexander Luthor) would re-enter the Post-Crisis dimension in an attempt to create their own version of the "Perfect Earth". This crisis would become known as the Infinite Crisis and would see the partial recreation of the Original Multiverse through the creation of the Alexander Luthor's Interregnum Multiverse. However this Multiverse was only temporary as the Earths couldn't sustain themselves and cascaded back into a singular entity. However this state was also temporary as the Earths slowly replicated to form 52 separate versions of itself; becoming known as the 52 Multiverse, and along with them, 52 individual Monitors.

The Monitors charging themselves with keeping order between the alternate dimensions and began hunting down what they would consider "Multiverse Anomalies", such as individuals living in the wrong dimension, living when they should be dead, or cross-dimensional travelers. Their efforts, coupled with those made by a now insane Superboy-Prime, the Monarch, and specifically when Darkseid rediscovered the Anti-Life Equation saw the new 52 Multiverse come under threat yet again, this crisis becoming known as the Final Crisis and was only won through the defeat of Darkseid and the complete reset of reality through a Miracle Machine created by Superman. 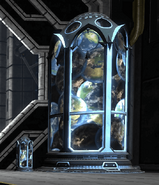 Retrieved from "https://dcuniverseonline.fandom.com/wiki/Multiverse?oldid=223880"
Community content is available under CC-BY-SA unless otherwise noted.