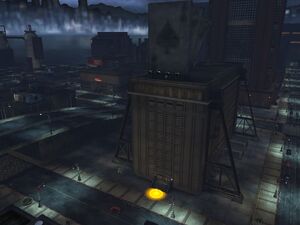 The Monarch Playing Card Company was the location where the Red Hood, trying to elude capture by the Batman after being involved in an attempt to steal money from the company, leapt off a catwalk and into a waste catch basin of chemicals. As a result, he was turned into the green-haired, white-skinned horror known as the Joker.

Now an abandoned factory, the Riddler has turned the building's lower floors into his own secret hideout; rigging the upper floors with tricks and puzzles to deter visitors.
Having been leaving clues for Batman to find; claiming that he knows who was behind Joker's latest chemical formula. Learning that Joker had hired Deathstroke to kill Riddler before he revealed his secret, Batman sends a new hero to the hideout to get to Riddler before Deathstroke does.

After Riddler leaves Intergang takes over this for a trap for Batwoman this is presumably case due to the layout as well as a left behind Riddler wanted poster.

In the tier 5 challenge Iconic Anomaly: The Hunt the player has to infiltrate the Cassamento Warehouse which is also located in where Riddler later put his hideout.

What never speaks yet shows the way? Get to the point, it's clear as day!

Want to get past my LOCKS? Start to think outside the BOX! What I'm trying to CONVEY, will BELT you—so don't delay!

The answer to the final riddle? Me, of course! But you'll only get through if you solver all my riddles!

The middle son. the left path tread / With dreams of riches in his head.

The youngest took the middle pass; / A wife he hoped to find at last.

The eldest the right road did claim, / A fine estate was his good aim.

[...] Order not their paths, but instead their ages. 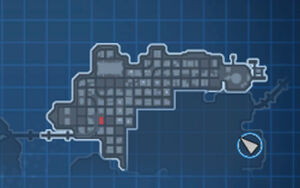 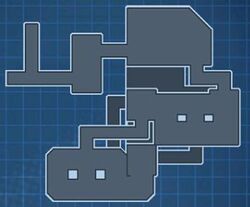 Retrieved from "https://dcuniverseonline.fandom.com/wiki/Monarch_Playing_Card_Company?oldid=228424"
Community content is available under CC-BY-SA unless otherwise noted.