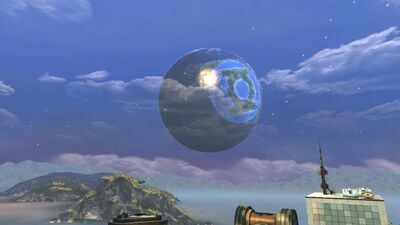 Mogo, the Living Planet is a sentient planetoid and a member of the Green Lantern Corps. Easily the largest member of the corps, Mogo is responsible for programing and guiding the corps' Power Rings to new sentient beings after their creation.

When Mogo desires to do so, his affiliation with the Green Lantern Corps is marked by moving the foilage around his equator into a green band with a Green Lantern symbol in the middle.

Mogo is not considered to be a "social" Green Lantern in the way other members of the Corps are, preferring to represent himself using pseudonymous holograms instead of announcing himself outright. In addition, Mogo largely avoids populated areas due to the fact that his gravitational field would wreak havoc on any other planet he would try to "visit". As a result Mogo largely remains isolated and his interactions with the rest of the universe are not well-documented. Despite this, he is respected and well-liked by the rest of the Corps.

Bolphunga the Unrelenting, an alien hunter, was one of Mogo's first direct adversaries. Having tracked the legendary Green Lantern Mogo to the planet where he apparently 'resided', Bolphunga subsequently spent years searching the planet for him, examining various plants and animals for any sign of a power ring, until closer examination of patterns in the foliage led him to realize that "Mogo" was actually the planet he was on.

In another incident, Mogo, using pseudonymous holograms, purchased some space dolphins from Lobo and formed a symbiotic relationship with them; with the dolphins eating the space debris that fell to Mogo's surface while Mogo provided them with a home to live.

When the Parallax entity, who was at that time inhabiting the body of Hal Jordan, destroyed the Power Battery on Oa and slew nearly all of the Guardians of the Universe, Mogo lost contact with the Green Lantern energy that helped sustain him. He traveled to Sector 1014 to seek the aid of Ch'p, unaware that his friend had died long ago. Eventually, Mogo's ring ran out of power and he lost consciousness, drifting through Sector 1014 until he was discovered by a nomadic alien race. These aliens proceeded to strip Mogo of his natural resources and pollute his environment. Mogo's body reacted instinctively, creating constructs to hinder the aliens' efforts to exploit his resources.
Mogo was finally rescued by Kyle Rayner, who used his power ring to reawaken the sleeping giant. Mogo offered to allow the aliens to settle on him but the beings chose to abandon their settlements instead.

Beginning to reconsider his isolated stance, Mogo requested back-up when confronted by Rannian and Thanagarian forces and Green Lanterns Kyle Rayner, Guy Gardner, Stel, and Green Man were dispatched to clear out the enemy fleets.
Following the restoration of the Green Lantern Corps, Mogo took on the role of a training and recreation base for his fellow Green Lanterns and having also changed his policy on isolation, now encouraged Green Lanterns to come and enjoy rest on his surface; offering to give counsel to Green Lanterns struggling with issues in their lives.

On the eve of the Sinestro Corps' war on the Green Lantern Corps, Despotellis infected Mogo with mushroom spores which caused the Green Lanterns receiving counseling to be infected with hallucinations and then driven mad. Guy Gardner, despite being framed for murder caused by this event, managed to figure out what was happening and with several other Green Lanterns succeeded in removing the spore's influence, allowing Mogo to destroy the mother spore.
During the developing conflict against the Sinestro Corps, Mogo became responsible for directing Green Lantern Rings to new bearers after their Green Lanterns died. Because the Corps was in a constant state of recruitment, he was targeted by the Sinestro Corps for destruction, recruiting Ranx to counter the sentient planet.

Mogo as seen from Ranx