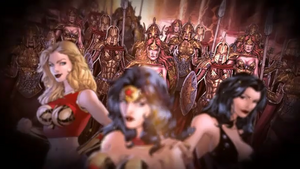 A Mob is a generic term for any non-player entity whose primary purpose is to be killed for experience or to advanced towards a boss fight.

In DC Universe Online mobs usually are gang/group members, with a costume/look themed after their leader (for ex. minions in missions leading up to fighting the Joker are clown themed). This include Gotham/Metropolis law enforcement.

Mobs in DCUO are always hostile and will attack a player of the opposing faction once he comes into visual range. Like the player, mobs have weapon styles and powers. As of game update 18 mobs can use lunges, blocks and block breakers.

Mini-Bosses are powerful mobs that do not fit in either bounties or boss categories. Visually they are often identical or recolored versions of regular mobs.

They usually are found as middle bosses in the last instance of a story arc or as last encounters in smaller instances, leading up to the final instance.