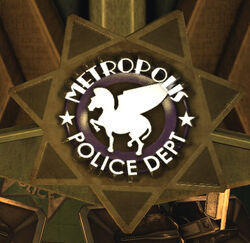 The Metropolis Police Department is the local city law enforcement agency for Metropolis and as such is a constituted body empowered by the state to enforce the governmental laws of the United States of America in order to protect the city's citizens, property, and limit civil disorder.

Working publicly alongside Superman in defending Metropolis, the M.P.D. possessed a specialized Special Crimes Unit dedicated to dealing with crimes involving superhuman menaces. Since its creation, the unit has since evolved into the Science Police enforcement division, which is tasked with resolving criminal matters that were otherwise considered too extreme for the average police officer to handle or in combating superhuman threats against the city in case members of the Superman Family are absent.

Unfortunately, despite their advanced resources and high moral standing within the community, many of the police consider themselves as nothing more than glorified "street cleaners" due to an inferiority complex formed from metahuman heroes arriving to deal with public threats that easily overpower the established police force. From their eyes, since they can not protect the public against these threats, the force is regulated to merely cleaning up whatever mess arises after the super hero arrives to do the police's job and "save the day".

Prior to the arrival of Superman, the MPD had formed a specialized Special Crimes Unit to handle extranormal threats. The first captain of the squad, Maggie Sawyer, formed a core team that became a model for S.C.U.'s around the country. Following Superman's debute, the S.C.U. worked alongside Superman in incarcerating superpowered criminals and organizations such as Intergang. Much of their specialized equipment was designed and provided by the city's branch of S.T.A.R. Labs, however, following the creation of Steelworks by John Henry Irons, the SCU accepted a contract with the company for the provision of advanced non-lethal weaponry; a contract that the city's other major weaponry supplier;LexCorp, has repeatedly contested, questioning the effectiveness of non-lethal force against metahumans.

Following the Infinite Crisis, the Federal Government christened a new branch of law enforcement dedicated to dealing with high-tech threats to citizens. Midway City and Metropolis were two of the first cities to receive branches of this new agency, replacing the local Special Crime Unit with the new branch known as the Science Police.