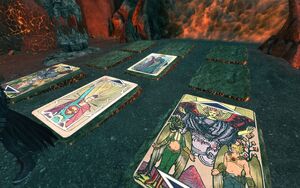 Metal Pt. II: Into the Dark Multiverse is a tier 5 raid in the Metal Part II episode. It is also available as elite version.

The time has come to face Barbatos! Meet up with Batman, Wonder Woman, and Lady Blackhawk in the Dark Multiverse and form a plan of action to end this nightmare!

The enemy combat rating is 293.

The objective of this game is to make the existing four cards disappear to win the hand. There is a book on a pedestal at the bottom right corner of the board that can be interacted with to learn the rules.

The game is started by talking to The Batman Who Laughs, which opens a purple portal on the left side of the area. 4 players should enter there to fetch three cards, presumably a majority of damage players.

Fetched cards will appear standing up at the energy barrier and can then be placed on the playing field by one of the remaining players.

Each card has arrows which stand for an attack direction, e.g. the Wonder Woman card can only attack downwards while the Nightwing card can attack upwards and to the right.

Attacking another card which has no counter-arrow at the attack direction always allows you to beat it. The strength of the card comes into play when you attack in a direction where you encounter counter-arrows:

Attacking a card with a counter-arrow will only be successful if the attacking card is stronger than the attacked card. When one of Batman Who Laughs' card is beaten, it disappears, allowing you to place another card where it was if necessary (but your own winning card would remain).

Analyze the card deck and then tell the players who went through the portal which cards you need and in which order. At least 1 card chosen needs to be capable of eliminating 2 opposing cards at the same time (Hawkgirl, Nightwing or Robin).

If you lose the game, Batman takes damage. Losing 3 times in a row will KO him and instantly KO your whole team. Upon losing a game, the board will reset and may change to a different setup - but there seems to only be a few possible setups.

To avoid Forgemaster Hawkman's Ground Pound attack, players would need to hide behind the rocks when he starts moving toward the center. The tank should taunt Hawkman away from the rocks so they would be safe from being destroyed.

In elite, you need to additionally avoid the Ember Forges, by constantly moving/jumping around since those are lethal.