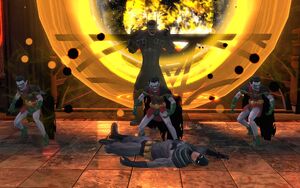 Our planet's organized resistance to the Dark Knights has holed up in the Oblivion Bar to plan the next steps trying to save reality.

The enemy combat rating is 293.

Talk to Hawkgirl to start a cutscene in which the heroes discuss the situation, culminating in Hawkgirl saying she can't see how this could be any worse. Right on cue, Batman Who Laughs boom tubes in with Dark Robins and dumps a comatose Batman in front of him before leaving. Defeat the Dark Robins while the heroes figure out Batman is rigged to a bomb and you must go into his mind to save him.

You arrive at a mental version of the Batcave. Inside are 5 spots each connected to one of the Dark Knights; 2 random ones would be marked by a swarm of black bats, and would cause the corresponding Dark Knight to appear. You must defeat the first before the second can appear.

Afterwards, go up to the Batcomputer platform to defend Batman from the Dark Knights. The next location is a theatre where he is attacked by illusions of the Batfamily (2 consoles before the theatre allow you to skip the cutscene, both players must activate one each). If Batman is KO'ed at any point, you are given a short time to rally him, and if he is not rallied, Batman will instantly KO you.

At the beginning of the instance, while you are instructed to talk to Hawkgirl, you can talk to three more characters beforehand (you won't be able to do so after talking to Hawkgirl).