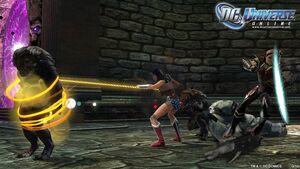 Mesmerizing Lasso is an Iconic power that becomes available at Level 10. The power is themed on the Iconic Super-Hero Wonder Woman.

A copy of Wonder Woman's Lasso of Truth, the Lasso of Truth was forged by the god, Hephaestus, from the Golden Girdle of Gaea that was once worn by Antiope, sister of Queen Hippolyta, and given to Hippolyta after hers was stolen by Heracles as part of his Twelve Labors. Empowered by the Fires of Hestia, the Lasso forces anyone held by it to tell and understand the absolute truth.

Lasso an enemy and pull them towards you, grounding, stunning, and causing damage over time.

Tank Role : Taunts a single target to attack you instead of others. The effect is more powerful and will not be broken by a standard Tank Role taunt.

Deals 3 Ticks of smaller damage after the initial larger hit.