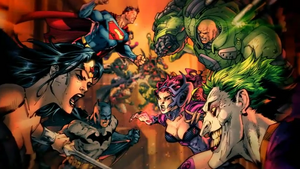 Mentors are iconic DC characters that guide the player through the game by offering them missions and quests.

Both Heroes and Villains have a trinity of mentors, each one is associated with a particular power origin (Meta, Tech, or Magic). The choice of mentor dictates the quests players receive after the game's tutorial level but does not have combat-related effects nor have bearing on DLC episodes.

While under the heading of mentors, it is worth noting that the relationship between iconics and players is more akin to that of coordinators and their agents, as players aren't under their apprenticeship and are expected to be full-fledged heroes/villains.

Retrieved from "https://dcuniverseonline.fandom.com/wiki/Mentors?oldid=253713"
Community content is available under CC-BY-SA unless otherwise noted.