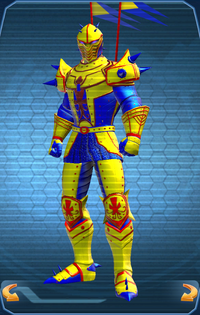 Medieval is an Armor Style Set.

It is also available in certain tier 6-7 content as scaling unattuned gear with item levels 134-160 (confirmed from Deep Desires, Act of Defiance, The Demon's Plan). However, unlike normal loot drops, they are only available as options in the Loot Picker if you are within the Combat Rating relevancy range of the instance. The minimum level of 134 is unusually high (more than 40 levels higher than your gear, if you gear has similar levels and you are at 105 CR, minimum for Act of Defiance), allowing characters to jump ahead in Combat Rating. Despite Throne of the Dead being a raid and having slightly higher CR requirement than Act of Defiance, it only drops the much lower Biker scaling unattuned gear. 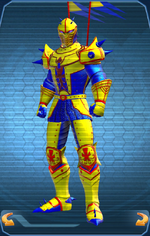 The Medieval's overall color-scheme consists of three colors that can be chosen by the Player in the Style Window. Specific sections of the style's pieces can also be allocated a more specific colour by the Player.