Legion of Doom is Tier 6 playable content that contains the open world Doomed Washington, D.C., the duo Doom: Umbrax the Ultraviolet, the alert Doom: The One Who Waits and the 8-player operation Doom: The Sixth Dimension.

Episode 42: Legion of Doom was released on December 9th, 2021. Access to this content is available to all players for free.

Lex Luthor has assembled a new Legion of Doom in service to a nigh-omnipotent cosmic master: Perpetua! Join Martian Manhunter in forming a cosmic team powerful enough to oppose her before she rewrites the entire Multiverse in her doomed image!

Confront Sinestro and his Ultraviolet Lanterns at the LexCorp moon base before their invasion reaches, and dooms, Earth!

The One Who Waits[]

Go to your League Hall with Martian Manhunter to meet Mister Mxyzptlk who has agreed to help you. But something about it feels off...

Our best chance to defeat Perpetua and her Doom is to unite her sons against her. Mister Mxyzptlk opened the way to the Sixth Dimension where well find the World Forger. If we can convince him to join us and if the Monitor can recruit the Anti-Monitor, we might just have a chance.

The combat rating of the enemies is 350. 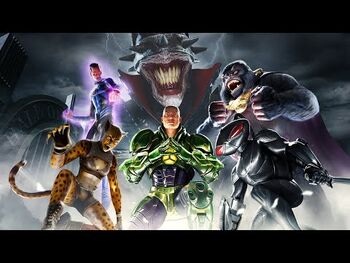