DC Universe Online Wiki
Register
Don't have an account?
Sign In
Advertisement
in: Halls of Power Part I, 8 Players, Raids 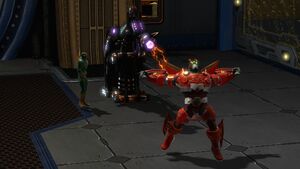 League Hall: Lockdown is an Tier 2 8-player Raid included in the Halls of Power Part I Episode.

Defend your league hall from an enemy force bent on retrieving the Third World artifact now humming with power in your league’s hall. Wave after wave of enemies will launch an assault, with powerful bosses and an epic last battle. This is one of the more difficult pieces of content in the DLC Pack. This challenging raid is fashioned after the Prime Battleground and the Survival Mode Event.

Enemies from Apokolips are invading the League Hall in an attempt to steal a recovered artifact. This ancient item must not fall into the hands of Darkseid!

Enemies from New Genesis are invading the League Hall in an attempt to recover a stolen artifact. They must not remove this ancient item from Darkseid's clutches. 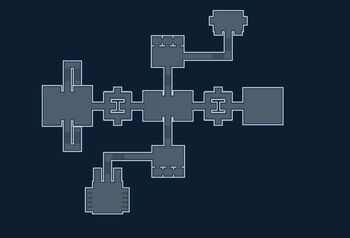 The whole raid takes place in the center hall of a league hall.

The artifact displayed in the center of the hall determines which effect will appear during the raid.

Emits a snow white field which causes moderate damage over time and also stuns players.
Not as deadly as the other two, but still move out asap if you get caught in the AOE.

Emits a fire-like field which causes extreme damage over time.
Avoid it, you likely will not have a chance to move out.

Emits a laser like beam widely rotating in a full circle. Contact with it results in extreme instant damage.
Be as far away from the center of the beam as possible and block. Shields will help.

The effect stays the same for the whole raid and always spawns in one of five fixed locations in the hall. Seen from above the layout is like a five on dice. There is a small time window from when the small balls in the center of the effect appear to when the effect becomes active. In general, avoid the area of effect of the artifact's effect from the moment those start to appear. It's a good idea to zoom out your camera, so that you can better spot the appearance of those.

If players get caged, they can be freed with the device in the far right side of the hall.

If players get the red aura, they become a threat to their teammates and have to stay away from other players until the aura wears off.

The detaining rifle to cage Kalibak / Mister Miracle or Mantis / Big Barda cannot be used by the same player twice in a row. Usually two players will alternate for this job. The rifle will appear on the floor and also drop there after being used.

Keep an eye out for the Parademon Technicians / Colony Engineers. During the final fight they will try to reach the center platform with the artifact on it in order to build a makeshift teleporter. If they succeed four times the raid has failed. 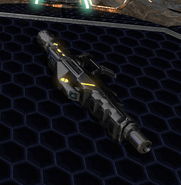 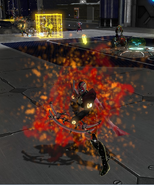 Player with the Aura
Community content is available under CC-BY-SA unless otherwise noted.
Advertisement