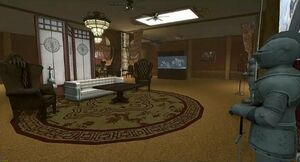 Available to Player Character level 10 and above, Lairs and Hideouts (a.k.a. bases) are obtainable "personal living spaces" for a player's character to dwell.

Each Lair comes with a location-theme: sewer, penthouse, cave, bunker, tech, etc, that can be customized by the player with various objects, props and furniture found in-game or in the marketplace. The entrance to a lair can be set by the player to be in either Gotham City or Metropolis.

* These Lair Themes have a large extra room, but PvP lair fights will not be possible.

Price of Deeds depend on the location's proximity with other landmarks and the area's difficulty level.

Since game update 110 any player character can have up to 8 bases.