Kryptonite is a radioactive element from Superman's home planet of Krypton. It is famous for being the natural weakness of Kryptonians.

The only sample of kryptonite originally found on Earth was a single fist-sized chunk that had been caught in the tail of the infant Kal-El's rocket and carried to Earth along with him upon the explosion of Krypton.
This sample had been found by the scientist who resurrected John Corben as Metallo in a paranoid attempt to save the world from Superman. Metallo was soon kidnapped and his power source forcibly removed by Lex Luthor who, after discovering its debilitating effects on Kryptonians, created a ring with a kryptonite gem to keep Superman at bay.

The amount of kryptonite on Earth increased dramatically after a meteor storm that accompanied the rocket that brought Kara Zor-El to Earth. Superman-friendly corporations, such as Wayne Enterprises and Kord Industries took it upon themselves to round up this influx of kryptonite, but much of it goes into illicit circulation or is stolen from holding facilities. 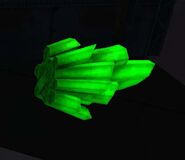 Kryptonite in the Metropolis General Hospital.