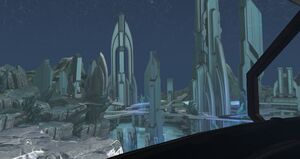 Krypton is an extinct planet that was approximately one and a half times larger than the Earth and orbited a red sun called Rao, 50 light-years from Earth's solar system.
Once holding host to a scientific and technologically powerful race known as Kryptonians, the planet is famed on Earth for being the home planet of Superman and of various members of his heroic family; including Supergirl, Krypto and Power Girl (albeit from a different universal dimension).

On the surface, Kryptonians were physically indistinguishable from humans, however their biology is far more advanced in that they are able to absorb and utilize energy within their bodies with far more direct and elaborate manners than humans. Due to this trait Kryptonians can develop "super-powers" such as super speed, heat vision, x-ray vision, super breath, flight, super strength and invulnerability when exposed to a source of energy that is alternate from that of red solar radiation.

Krypton's primordial era produced some of the most dangerous organisms in the universe. Until its destruction, many dangerous animals still existed on Krypton and Kryptonians had to use their advanced technology to survive.
Over 100,000 years ago, Krypton had already developed scientific advancements far beyond those of present-day Earth, and within a few millennia had conquered disease, learned to delay the aging process, and perfected cloning; creating vast banks of non-sentient clones which held multiple copies of each living Kryptonian so that replacement parts were always available in the case of injury. With these discoveries, all Kryptonians were effectively immortal and enjoyed an idyllic, sensual existence in an Arcadian paradise.
However, this society was tipping toward decadence and eventually political strife arose from a debate as to whether the clones should have rights. Eventually this disagreement led to open conflict after an overprotective mother freed a younger clone of herself and guided her to be her son's girlfriend and lover, and later wife, as she did not believe that any other woman besides herself would be good enough for her son. When the son eventually discovered that his beloved wife was actually a clone of his mother, and that she was pregnant with their child, he snapped and killed his mother, his wife and then himself. This incident ignited the "Clone Wars", during which Kryptonian science was turned to warfare and several super-weapons were developed and used. Among them were the devices which became known as the Eradicator and the Destroyer.

By the time the Kryptonian government admitted defeat and abolished the clone banks, a pro-clone rights terrorist faction known as Black Zero had activated the Destroyer; projecting massive streams of nuclear energy into the core of Krypton with the intention of triggering an explosive chain reaction within the planet's core. At the time, it was believed that the device had been stopped before it could achieve planetary destruction but the reaction had simply been slowed to a nearly imperceptible rate.
Though it had perceptively survived the war, Krypton had been scarred deeply. The formerly lush garden world was burned and left mostly as a lifeless desert. From this dead planet, Krypton, using the technology and weapons developed during the war, became an expanding empire that sought out and conquered other planets.
The Kryptonian military at this point was led by Admiral Dru-Zod the First, who commanded entire fleets of ships and scouted planets for potential conquest. Some three-hundred years ago, Admiral Zod's capital ship, the Doomsday, crash-landed on Earth in the region that would eventually become known as Texas.
Soon after, the Kryptonian Empire was dismantled after the Kryptonian High Council decided that their methods were too aggressive and so ended what was later considered Krypton's "Golden Age".

While Kryptonian civilization still flourished, the planet turned towards isolationism and, in direct contrast to the society that had existed prior to the Clone Wars, a sterile and emotionally dead civilization emerged due to the High Council's strict pursuit of peace. The population became isolated from one another; living in widely separated technological citadels and shunning all personal and physical contact. Any attempt to contact other worlds was forbidden and the planetary government maintained an isolationist stance, forbidding space exploration of any kind. This was enforced through the use of the Eradicator machine altering the genetic codes of Kryptonian children so that they could only survive on Krypton.

It was into this world that the young scientist Jor-El and his brother Zor-El, were born. Jor-El discovered the existence of the Phantom Zone and introduced it as an alternative means of imprisonment. The first prisoner to be exiled to the Phantom Zone was the renegade scientist Jax-Ur. Jax-Ur, a former colleague of Jor-El's, was responsible for destroying Krypton's moon during an attempt at interstellar space travel. When the moon was destroyed, a lunar colony of the city of Kandor was lost as well, drawing the attention of the Coluan villain Brainiac to the city of Kandor. Brainiac kidnapped the entire city of Kandor and miniaturized it within his spaceship before leaving.
Some time later, a mysterious "Green Plague" was killing Kryptonians by the hundreds, and upon researching the matter, Jor-El and his mentor, Non, discovered that the cause was from a growing radiation produced by the planet's increasingly unstable core.
When the Science Council dismissed their assertions as a vehicle of paranoia and discord Jor-El, reasoning that modern Kryptonian society had grown cold, unfeeling and thus decadent began making plans to save his son, Kal-El, from the planet's destruction. After discovering an ideal planet for his son to live and removing the Eradicator's planetary binding genes from his genetic pattern, Jor-El took the birthing matrix of his unborn son and attached a prototype interstellar propulsion system to the vessel. Just as the planet began to shake apart, he launched the matrix towards Earth.

Unlike many on the Kryptonian Science Council, Zor-El heeded his brother's warnings that the planet would soon explode and reverse-engineered force field technology left behind from when Brainiac stole Kandor. Although Zor-El could not perfect the device, he did succeed in creating a force field bubble that would enable Argo City to survive Krypton's destruction. However, Brainiac eventually sensed that his technology was being used elsewhere and tracked Argo City down. He assimilated the city and merged it with the Bottle City of Kandor as Krypton was in the process of exploding. During the assimilation, Zor-El and his wife, Alura, were able to send their teenage daughter, Kara Zor-El in a rocket ship programmed to follow after that of baby Kal-El but her rocket was caught in a large Kryptonite encrusted meteor resulting in her arriving on Earth years after her initially younger cousin.