Time Capsules are loot boxes that offer the player the ability to choose one of three rewards, and also grant one additional reward. The rewards from Time Capsules can be Style items, Gear pieces, Collections pieces, and Acessories.

These are the probabilities of receiving rewards of a given rarity, either as a choice or a direct drop:

A Knight of Vengeance Time Capsule is a legendary box item dropped randomly by any enemy defeated by the player once they reach level 10. It was first released on March 18th, 2021 shortly before the release of the World of Flashpoint episode.

Booster Gold filled some Time Capsules full of useful items from different times and places within the Multiverse and brought them here! In order to open a capsule full of goods players must have a Stabilizer. Capsules are given liberally in game, but Stabilizers are sold on the marketplace or earned in game.

Each capsule is full of goodies including gear, new styles, auras, crafting materials, and more.

How to Obtain a Time Capsule[]

Time Capsules can be obtained through regular gameplay. You don’t need to do anything special in order to get these. As you’re playing the game as you normally would, you will eventually find a capsule waiting for you when you defeat an enemy.

How to Open a Time Capsule[]

To open a capsule, you’ll need a Stabilizer. There are two ways to obtain a stabilizer: purchasing one from the Marketplace for 100 Daybreak Cash (PC) or Marketplace Cash (Console), or putting one together through gameplay.

When you purchase a whole Stabilizer from the Marketplace, you can use it right away to open your capsule.

Once you use a stabilizer to open a capsule, you’ll see what sort of goodies Booster Gold has sent to you!

What is Inside a Time Capsule[]

Each capsule is tradable and once opened will include a variety of useful, mostly tradable, items. 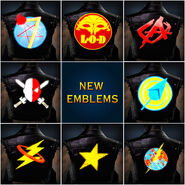