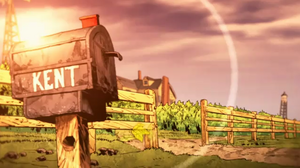 The Kent Family Farm is an agricultural production farm located within the farming community of Smallville. The farm has been run by the Kent family for several generations.

The farm was first built and settled in 1871 by Nathaniel Kent, son of Silas and Abigail Kent. Nathaniel and his wife, Mary Glenowen, built the original two-room farmhouse from walnut logs harvested on the land. With the success of the fertile mid-western soil and a larger family, the Kents later built a new home closer to the dirt road leading into town in 1903. Indoor bathroom facilities and additional rooms were added in 1938, and in 1957 a second story was built.

After returning from World War II, Jonathan Kent inherited the farm and married his love, Martha Clark, before settling down on his family farm to a normal life.
Over the course of several years, the Kents attempted to start a family, but each attempt ended with disaster; suffering through eight miscarriages and stillborn births. Martha non-the-less prayed every day for a child. Two years later, Smallville suffered the worst blizzard the town had seen in over a century. While driving down the highway adjacent to their property, the couple witnessed a meteor shower rain down around them, with one meteor crashing into a field close to them. Curious, the couple ventured to the crater in the field and found a spaceship with a baby boy inside. Martha saw the boy as a gift from the heavens and, seeking to provide the child with shelter, the couple loaded the ship onto their truck, took the boy home. Fearing that the child might have been the subject of a Russian cosmonaut mission, the Kents decided to take him in. The blizzard sequestered the couple to their farm for six months. During this time, Jonathan moved the rocket ship closer to the property and buried it beneath an old barn. When conditions improved and they were able to leave, the Kents presented the child (whom they named Clark) to the community as their own biological "miracle child" and they raised the child as their own.

Several years ago, the super-villain Conduit learned of Clark's dual identity as Superman and attacked the Kents in order to get to him. He destroyed the farm forcing Jonathan and Martha Kent to live on the road for several months in a recreational vehicle. Before the Kents eventually returned to Smallville and rebuilt their home.