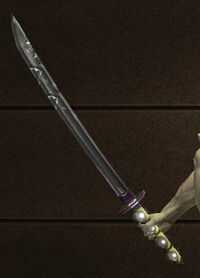 The Katana is a Weapon Style for either One-Handed or Dual Wield weapons. The style is based on the weapon of the same name.

Heavily associated with its country of origin; Japan, the katana is a curved, slender, single-edged blade with a circular or squared guard and long grip to accommodate two hands.
Traditionally made from a specialized Japanese steel called "Tamahagane", the katana evolved from the Tachi blade in the 1400's. The rise in the katana's popularity is believed to have been due to the changing nature of close-combat warfare where the sword's quicker draw enabled the wielder an edge in duels and one-on-one encounters.

During the Meiji period the modernization of Japan's military and the disbanding of the Samurai class saw a decline in sword manufacture until pre-World War II when all Japanese officers were required to wear a sword. After the war, sword manufacture and sword related martial arts were banned in Japan and many swords were confiscated and destroyed until 1953, when they were allowed to return.