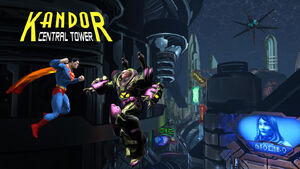 Kandor Central Tower is a Tier 4 Raid in Episode 26 released in July 2016.

Access to the Kandor Central Tower Raid requires a Combat Rating of 150.

Kandor Central Tower is part of Episode 26 together with the Wayne Manor Gala Duo.

Using stolen technology, General Zod has restored Kandor to its normal size! Still trapped within Brainiac’s bottle, Kandor now resides in the Arctic near the Fortress of Solitude. While its unknown whether Kandor on its own is a threat to Humanity, there is no doubt that Zod intends to raise an army of Kryptonians and rule the planet. Join Superman, Superboy, and Supergirl in Kandor to convince everyone that Humans and Kryptonians can share the planet and live in peace.

The enemy combat rating is 175.

Entering the raid, speak to Superman. He tells you that Kandor is all that remains of Krypton and he and the other kryptonians are here to ensure its safety. Supergirl says they must find her mother, Alura. On the way there, you will fight waves of enemies, and then you will confront Alura. She is actually with General Zod, and since he plans on using Kandor to take over Earth, you must defeat him in battle. Alura also attacks you, but cannot be defeated.

After you defeat Zod, Lex Luthor appears and states that he's here to make sure that Superman and the others never leave Kandor. Defeat Lex Luthor to proceed. During the battle, Superboy will become an enemy and fight you. One of the feats in this raid is to defeat Lex Luthor without defeating Superboy. After you defeat Luthor, he states that the battle is wasting his time and summons Doomsday. He knocks Superman out of the room and goes after him. You and the others must locate Superman and help him fight Doomsday.

Eventually, you do. Defeat Doomsday to finish the raid. There is actually a feat for those who have never got it, it is to let the others who have got it defeat Doomsday and you just stand back and watch.

After Doomsday is defeated, Supergirl states to Alura the players have bested Doomsday and should be trusted. After a conversation, Alura is convinced that Humans and Kryptonians can live in peace, and the raid ends.