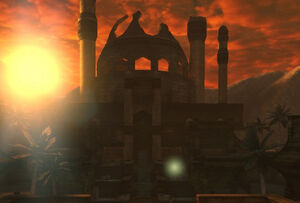 Kahndaq is a country located in the Middle East between Egypt and Palestine/Israel on the northern part of the Sinai Peninsula; it is the homeland of the anti-hero Black Adam.

Originally part of the Egyptian empire over 3600 years before modern time, the land-that-would-become-Kahndaq was ruled by Egyptian Pharaoh, Rameses II, and his son, Prince Teth-Adam.
The prince's fair treatment of his subjects and just attitudes impressed the wizard Shazam, who offered the prince the power to become Mighty-Adam; magical protector of the people.
Teth-Adam served Egypt for many years as the hero Mighty-Adam, but this duty drew him away from his wife and children in Kahndaq and while he was away, the mad priest, Ahk-ton, ravaged Khandaq and killed Adam's family using the Orb of Ra.

In recent times the country became ruled by a dictator named Asim Muhunnad. Following Adam's resurrection, Muhunnad was deposed and executed by Adam and a group of former Justice Society of America members. Reclaiming his ancient throne, Adam declared himself ruler and god of Kahndaq.

During the Infinite Crisis the country's capital, Shiruta, was declared along with all of Kahndaq as a land of sin by the Spectre, who was being manipulated and corrupted by Eclipso. The Spectre then swept across the country, turning dozens of Kahndaq's citizens into stone statues.

Black Adam fought to protect the city and the Justice Society of America arrived to assist until a bargain was made to cease the Specter's destructive rampage.

After the events of the Infinite Crisis, Adam re-dedicated himself as the protector of Kahndaq and instituted many severe laws.
Meeting Adrianna Tomaz; a young woman who had been presented to him by Intergang as a bribe to allow them to use Kahndaq as a base for their criminal activities, Adam fell in love and shared his powers with her, transforming her into the superhuman, Isis.

After Adam and Isis wed in a public ceremony by Captain Marvel, as an act of good will, Black Adam and Isis went to the United States as representatives of Kahndaq and participated in several events including a holiday parade and a charity dinner at the Sivana estate, however, due to distrust from other nations fostered by Amanda Waller and Intergang, Adam and Isis' attempts at friendly relations with other countries were ill fated.

The pair returned to their country and pledged themselves to turning Khandaq into an earthly paradise, however, their plans are short-lived as Kahndaq was attacked by the Four Horsemen, a quartet of artificially enhanced beings based in the nearby country of Bialya. During the battle, Isis dies after Kahndaq is blighted by acid rains sent by Pestilence.

Adam lashed out against the entire country of Bialya, killing every man, woman and child, even sterilizing the earth before embarking on a world-wide rampage against every country that had given himself and Isis grief, eventually going on to attack China, whom he suspected was responsible for financially backing the Oolong Island experiments that resulted in the creation of the Four Horsemen. After a fierce battle with both Chinese and foreign superheroes from across the globe, Adam returned to Kahndaq with the mission of resurrecting his wife his only goal.