Johnny Quick is the fastest man alive on Earth-3, one half of a mass-murdering duo known as "Johnny and Rhonnie", and a founding member of the Crime Syndicate of America.

A sadistic thrill-killer with super-speed, Johnny is the Earth-3 version and moral opposite of New Earth's Flash (Barry Allen).

Jonathan Allen and his lover, Rhonda Pineda, were a pair wild teenagers who only sought to enjoy the most out of life by finding and participating in that they found interesting or exciting. To this end, the pair quickly fell into crime and the rush they got from committing them. While initially starting with petty thefts, the duo quickly escalated their activities to robberies, rapes and sadistic murders as they sought out greater thrills and excitement.

Pursued by officer Leonard Snart and his partner, Mick Rory, of the Central City Police after the duo had skinned detective Mardon, bled out sergeant Scudder and killed rookie officer Walker, the two officers manage to capture Johnny but Rhonda intercepts the convoy and the pair escape into a nearby STAR Labs building.
Trapped on a rooftop by pursuing police, the duo was on the verge of rushing the police in a hail of bullets when a lightning bolt struck the roof, causing both of the criminals to fall through the roof skylight into the laboratory below. While Jonathan fell amongst various tubes of chemicals; giving him super speed, Rhonda falls next to an energy vessel containing the atomic energy of Ray Palmer (Atomico). As the energy vessel was breached the energy leached into Rhonda's body; giving her the ability to alter her atomic size.

Imbued with superpowers, Jonathan dubs himself "Johnny Quick" while Rhonda takes on the costume and mantle of Atomico; dubbing herself "Atomica". Renewing their crime spree, the duo are recruited by Ultraman to join the Crime Syndicate of America. 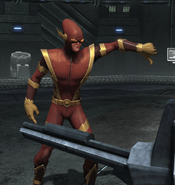