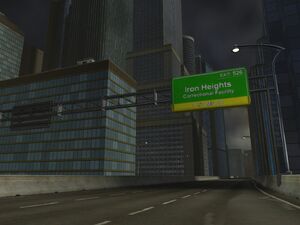 Iron Heights Penitentiary is a maximum-security prison for Central City and Keystone City. Equipped specifically to deal with threats of a super-powered nature, the penitentiary is frequently populated by members of the Flash's Rogues Gallery.

The penitentiary is infamous for the vicious and brutal treatment of its prisoners. Under the ruthless authority of Warden Gregory Wolfe, a former prosecutor of St. Louis who possesses a personal hatred for supervillains, the penitentiary has instituted a lockdown system in the building, with guards ordered to shoot any prisoner if they try to escape.
As the prison also holds average criminals, metahuman prisoners are jailed in an area known as "the Pipeline." The Pipeline is the dark, dank basement of Iron Heights where the prisoners are treated under awful living conditions with little food or water. The prisoners are kept in their costumes so the guards can identify them immediately.