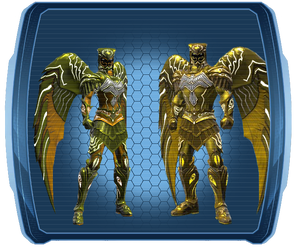 The Hera's Strength is a costume style set and an Iconic Battle Suit for Magic-based Heroes. Named for Hera, Greek goddess of women and marriage, and the wife of Zeus, this armor comes from Olympus itself, with each armor piece created to favor one of the attributes of the various Greek Gods.

Consisting of eight pieces, the set is themed after Wonder Woman and is a specialized Tier 2 PvE (Player versus Environment) set only available from Donna Troy in the Magic Wing of the JLA Watchtower. 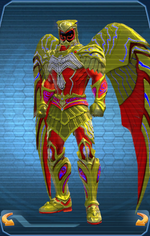 The Hera's Strength overall color-scheme consists of three colors that can be chosen by the Player in the Style Window. Specific sections of the style's pieces can also be allocated a more specific color by the Player.