Detective Harvey Bullock is one of the few honest yet corrupt cops in the GCPD, who served alongside James Gordon for many years as his partner, but is willing to go outside of the system to get work done.

Perhaps one of the most controversial members of the department, Bullock has little respect for vigilantes like Batman, and has even considered him a criminal at times, but has still teamed up with him to keep Gotham safe on numerous occasions.

Having lost his job and friends, after completing a final case as a civilian where he went off on a binge and attacked the Penguin; incorrectly thinking he was responsible for a mass murder that had been haunting him for eight years. 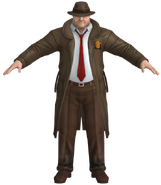