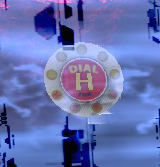 The H-Dial is a powerful artifact capable of turning the user into a super-powered being for a limited time.
Several copies of this artifact except in the world, with several having possessed its power over the centuries; most have come to regret using it however, due to the trouble the artifacts seem to attract.

Shaped like a phone dial, each time the owner dials the letters H-E-R-O, they turn into a different superpowered being; dialing O-R-E-H makes them revert to their normal form.
At the end of an hour, the H-Dial transformation must be reversed; if this is not done, the personality of whatever hero or villain the powers come from starts overtaking the host's mind until the original is completely rewritten.

Existing for unknown eons, a H-Dial was first reportedly found within a cave in modern time by Robby Reed, who used it to transform into a plethora of superheroes to defend his hometown of Littleville, Colorado, from aliens, mutants, robots and a menagerie of odd disasters drawn to the dial.

Two other dials are discovered years later by teenagers Christopher "Chris" King and Victoria "Vicky" Grant of the New England town of Fairfax in a 'haunted' house. The friends used their H-Dials to combat a strange array of villains while being pursued by a foe known as The Master, and aided by a mysterious ally, known as The Wizard. Eventually, it was revealed both the Master and the Wizard were alter-egos of Robby Reed, who had separated into them by using the Dial to disarm a dead man's switch and had never been able to recover the dial to return to his normal shape until then.

Vicky and Chris later demonstrated the ability to internalize the Dials' powers, presumably due to extended exposure, though not without side effects: Vicky became mentally unstable, while Chris found himself unable to control his transformations. Vicky's H-Dial was eventually discovered by the Scavenger and fell into the hands of Hero Cruz, who used it to gain super powers and later to aid Vicky in regaining her sanity.