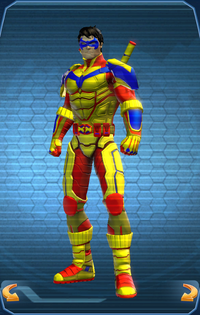 The Gotham Knight is an Iconic Battle Suit Style set for any role.

Consisting of eight pieces, the set is themed after the hero Nightwing as a specialized Tier 4 PvP (Player versus Player) set only available from the Requisitions-HA in the Hall of Heroes of the JLA Watchtower or Requisitions-VA in the Power Core of the Hall of Doom.

To obtain this set, players must be at Level 30 and have a PvP combat rating of 99 or above.

The set is also available as style items from Doctor Fate (Vendor) in the House of Legends. 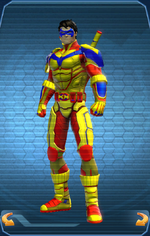 The Gotham Knight's overall color-scheme consists of three colors that can be chosen by the Player in the Style Window. Specific sections of the style's pieces can also be allocated a more specific colour by the Player.