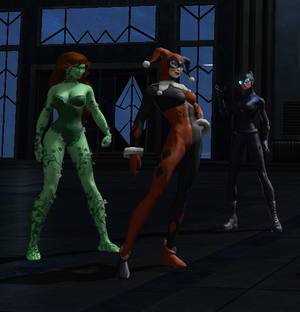 The Gotham City Sirens is the name used to refer to the alliance of Catwoman, Harley Quinn and Poison Ivy.

While they were aware of their reputations, Catwoman and Poison never really met until shortly after a 7.6 "Cataclysm" earthquake destroyed Gotham City.
Discovering Ivy in the process of enacting one of her schemes to infest the city by distributing a super fertilizer that will allow her plants to grow at an increased rate while the city reeled from the earthquake, Catwoman prevented her from releasing her seeds into the damaged reservoir.

After Ivy escaped custody and found solace within the remains of Robinson Park, adopting a small group of orphans as her own and fighting off enslavement by Clayface, she encountered the new villainess, Harley Quinn, after her boyfriend, the Joker, attempted to kill her by trapping her inside a rocket and firing it off into the air.
Crash landing in Robinson Park, Ivy originally took Harley in and helped her to recover but after recognizing her as one of the doctors at Arkham she planned to kill her, but when Harley did not care what Ivy was going to do as she was upset, it made Pamela curious. Ivy convinced Harley to tell her what her problem was. After Harley told Ivy about everything, Ivy and Harley became instant best friends and Ivy vowed to help her gain her revenge for what Joker put her through.

She was so angry at the Joker that she even teamed up with Batman to help bring him down. She chased Joker up the building while Batman took care of his henchmen. Harley was ready to kill the Joker, but when he apologized to her, she forgave him right away and they made up with a kiss. Ivy is angry at Harley for getting back with Joker, but eventually forgives her. Harley and Ivy have a sisterly-like bond and Ivy is usually the one Harley goes to when she and Joker have a break.