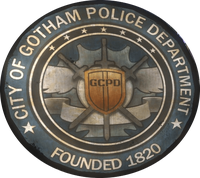 The Gotham City Police Department is the local city law enforcement agency for Gotham City and as such is a constituted body empowered by the state to enforce the governmental laws of the United States of America in order to protect the city's citizens, property, and limit civil disorder.

The Gotham City Police Department has long been steeped in political corruption, with numerous officers involved in bribery and even more serious offenses such as drug-trafficking and murder, due to the strength of the Gotham City Organized Crime Family's grip on the city until the arrival of James Gordon and the Batman saw justice return to power.

The GCPD has had a long love-hate relationship with the city's vigilante and members of his extended "family". While they recognize the heroes' abilities to solve crimes quicker and more effectively than they can due to political pressures and other such issues besieging their own efforts, they also resent them for it due to their presence largely calling into question the necessity and competency of the city's police force and their members. Due to this and the two group's natures (one being an officially elected police force and the other being an unsanctioned vigilante force), the GCPD and the Bat Family rarely co-operate together publicly unless a massive threat has besieged the city and forces the two groups to co-operate for the good of the city's citizens.

The Gotham City's police department had a reputation for corruption dating through the majority of the twentieth century. The corruption stemmed from the mayor's office and continued throughout the law enforcement and judicial branches of the city government.

When Carmine "the Roman" Falcone ran Gotham's underworld, the commissioner of police was Gillian B. Loeb, who steered his officers away from interfering with the Roman's operations. Things began to change for the better when an honest cop, James Gordon, transferred from Chicago and a costumed vigilante, Batman, both began to patrol the city's streets.
As Loeb was targeted by Batman as part of the vigilante's war against all of the city's underworld figures the commissioner ordered a massive police task force to capture the Batman at all costs. However, an increasing amount of conspiracy charges, brought forward by District Attorney Harvey Dent, against Loeb forced him to resign his position and he was replaced by equally corrupt Commissioner Peter Grogan.
After the death of Carmine Falcone, the city's crime families lashed out in retaliatory crimes which severely crippled organized crime in Gotham City. As a result the waning presence of corrupt police officers on the force allowed James Gordon to become the new police commissioner.

James Gordon succeeded Grogan and served for a lengthy period until politics interfered. In short order Peter Pauling, Andrew Howe, and Sarah Essen Gordon briefly took on the commissionership before Gordon was restored to his office.
As Gotham's crime families fought for turf with a rising tide of costume criminals operating within the city, the police department had to respond to deal with the ever increasing amount of extreme crimes being perpetrated. A Major Crimes Unit was founded to specialize in such cases, first headed by Sarah Essen Gordon and MacKenzie Bock. The department also created a Quick Response Team headed by Lieutenant Gerard "Jerry" Hennelly; this team was specifically trained and outfitted to combat scenarios involving a costumed criminal.
During Gotham's time as a No Man's Land following a catastrophic earthquake that leveled the city, many Officers of the GCPD remained in the city to help maintain order. When the city, abandoned by the United States government, began separating into factions, the GCPD became known as the "Blue Boys", led by ex-commissioner James Gordon. When the city was rebuilt and governmental rule returned, Gordon continued to serve as commissioner, assisted by the Batman in bringing justice to Gotham until a near fatal gunshot from a corrupt cop forced his retirement.
His successor, Commissioner Michael Akins, took a less lenient approach with Gotham's vigilante heroes and ordered the shoot-to-kill order of Batman and the estrangement of the police force from the hero's activities after the vigilante attempted to co-opt full control of the GCPD's police forces to quell a city-wide gang war before it tore apart the city.
Corruption within the police department return during Akins' tenure as Commissioner and following the Infinite Crisis he was replaced by Gordon, who returned from retirement to fill the post. Following this, positive relations with the Batman were re-established the police force continued to shine as a steadily glowing light in amidst a city known for its dark ambiance.