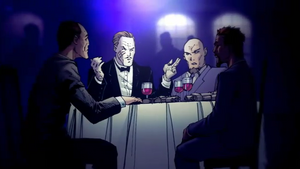 The Gotham City Organized Crime Family is a collection of criminal syndicates that operate within Gotham City.
As part of the Gotham Underground, the syndicates are a loose association of criminal groups. The larger of which share a common organizational structure and code of conduct. Each group claims sovereignty over a territory in which they operate their rackets.

While generally divided between the Italian, Sicilian and Russian mafias, the Gotham Families generally keep to their own territories and businesses within the city, very rarely resorting to anything beyond negotiation to settle public conflicts; although secret assassinations are also quite common. The Families also share business with groups such as the Triads, Yakuza and the Irish mob, who also operate within Gotham. At some points in the Gotham Underground's history, the entirety of the Families, mobs, groups and gangs were controlled by a single boss, known as Carmine "The Roman" Falcone.

Intent on inciting a city-wide gang war, the Joker sends various members of his streetgang to heckle both the members of the Gotham City Organized Crime Family and the Gotham City Police Department while also inciting their own chaos through the use of new robots designed by T.O. Morrow.