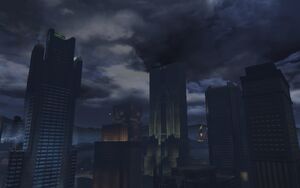 Gotham City is one of the oldest-established Eastern urban centres in the United States of America, located in the state of New Jersey.

It nestles at the mouth of the Gotham River upon islands once peopled by the vanished Miagani Tribe. Though it now resides in infamy for its rampant per capita crime rate, florid urban legends, and brooding Gothic spires, Gotham's 19th-century patrons once envisioned their community as a concrete and steel stronghold for pious righteousness and booming industrial growth.

Bolstered for generations by the business ventures of the wealthy Wayne Family, Gotham's economy helped the city to flourish as a technological hub, but one founded upon the swampy soils of slow and inexorable moral decay, despite the best of intentions. After the earthquake that leveled the city and the governmental sanctioned No Man's Land, New Gotham's skyline is an amalgam of yesterdays and tomorrows; with newly-erected towers of glass standing side-by-side with granite Gothic citadels preserved from the old city.

Protected by Batman and his affiliated "family" of heroes, Gotham City has come under attack by Brainiac; with the computerized despot entrapping entire city blocks within bottle-like energy fields while terrorizing the city's citizens.

During this chaos, the Scarecrow has seized the opportunity to begin spreading his fear toxin throughout this East End district, causing pandemonium in the streets while Bane has begun distributing Venom to the local gangs, making muscle-bound freaks out of otherwise two-bit criminals. The GCPD is attempting to crack down on the Falcone mobsters.

In other parts of the city, Poison Ivy has taken over the Giordano Botanical Gardens and the Joker has claimed almost the entire Otisburg district from Amusement Mile (where Harley Quinn is helping him to test toxins) to Ace Chemicals. Additionally, Trigon's followers have once again attempted to resurrect their lord in Robinson Park. Brother Eye (corrupted by Brainiac) has begun to unleash his OMACs across the city and Arkham Asylum has once again been overrun by its inmates. 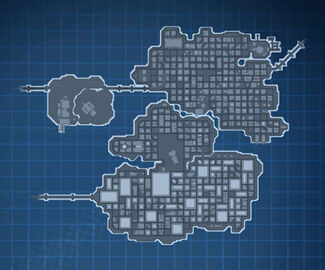 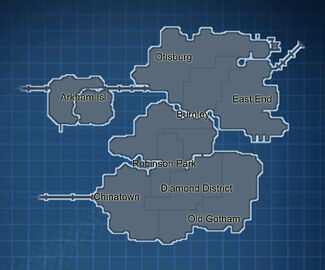