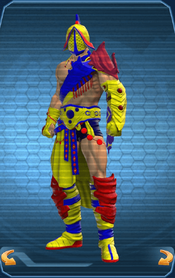 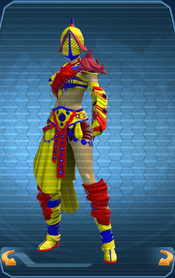 Gorgon Slayer is an Costume Style Set and Iconic Battle Suit available for heroes and villains.

Consisting of eight pieces, the set is an advanced PvE (Player versus Environment) gear set inspired by the vestments of the Greek demigod Perseus.

This set is attuned gear, has Item Levels 145 to 164 and is obtained as loot drop from the tier 8 instances such as Olympus (elite) and God of Monsters (elite) raids. A minimum PvE Combat Rating of 166 or above and the Amazon Fury Part III episode are pre-requisite of obtaining this gear.

The set is also available as style items from Wonderverse content. 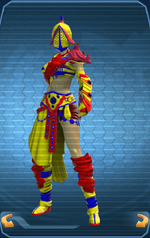 The Gorgon Slayer's overall color-scheme consists of three colors that can be chosen by the Player in the Style Window. Specific sections of the style's pieces can also be allocated a more specific colour by the Player.