DC Universe Online Wiki
Register
Don't have an account?
Sign In
Advertisement
in: The Battle for Earth, Heroes, Male,
and 3 more

The Crown Prince of the European state of Markovia, Geo-Force possesses immense powers connected to the Earth and as such is able to manipulate rock at will, create lava bursts from his hands and alter Earth's gravitational pull on himself and others.
As a commanding leader of his people and of the Outsiders, he took over leadership of the black-ops team following Batman's withdrawal.

The crown prince of Markovia, Prince Brion Markov allowed Dr. Helga Jace to use a device on him to give him geokinetic superpowers with which he could stop an insurrection mounted by the Baron Bedlam. As five other superheroes (Batman, Metamorpho, Black Lightning, Katana and Halo) also converge on Markovia for various reasons, the combined might of their power turned back Bedlam's armies and freed Markovia from the baron's tyranny. However, he could not save his father.
On his deathbed, King Viktor Markov his sons, Brion and Gregor, to do what they could to defend the country and also to look for the location of their half-sister Tara Markov.

While Gregor took the crown as Markovia's new king, Brion opted to stay with the heroes as part of a new "black ops" group known as "The Outsiders".
With the promise of learning to control his new powers, Brion travels with the team to Gotham City where he attends college in between missions. During a chance encounter with the Teen Titans, Brion is reunited with his half-sister, Tara, who had been sent to America by their father in order to avoid a scandal due to Tara's birth being the product of a illegitimate affair.
Following Tara's betrayal and death, the Titans decide to not reveal the extent of her betrayal to her brother, instead opting to let him believe that she had died a hero trying to defeat Deathstroke. However, Batman later reveals the truth to him.

After the Outsiders split from Batman, they become privately funded by Markovia and Brion becomes their unofficial leader of the team until Major Disaster destroys their base.
When the sovereignty of Markovia comes under threat yet again. Brion sends a team of Outsiders to investigate the mysterious new prime minister and discovers Psycho-Pirate attempting to gain rule over the country.

As the United States government withdraws any foreign aid from Markovia until they releases the true names of the Outsiders, King Gregor; Brion's older brother, is murdered before he can make a decision. Due to royal succession, Brion becomes the country's new king but is forced to abdicate and is imprisoned when Gregor's wife reveals that she is pregnant and becomes the country's new Queen, Queen Iona.
With the revelation that Dr. Helga Jace had allied herself with the Manhunters due to their dedication to knowledge and killed King Gregor, the incident is quickly followed with the death of Metamorpho and the depowerment of Looker and Halo falling into a coma. No longer able to hold the team together, Brion disbands the remaining Outsiders and retires as Geo-Force until he is inexplicably framed for the murder of Queen Iona and inadvertently forms a new group of Outsiders in an attempt to clear his name. 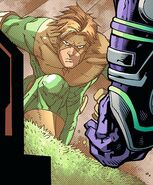