Generator Mods are mods which can be put into the generator of bases. Like Tactical Mods they are not build through Research and Development, but drop randomly from instances or can be bought from a vendor.

Affinity Generator Mods can be bought from a special vendor in the Tech Wings of the Watchtower and the Hall of Doom. They provide an additional boost or buff if the player is wearing two (A), four (B), six (C) or eight (D) pieces of elite gear (episode 16 or better). 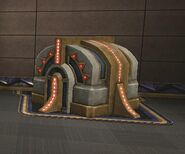