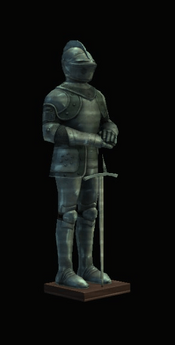 Gear, sometimes also referred to as Armor, is equipment that increases the player character's combat abilities by raising his or her stats.

Though it includes everything which can be equipped except for consumables, it is sometimes referring to costume style sets only. E.g. while there are unattuned and attuned trinkets, rings and necklaces in the game, there are no such elite versions.

Gear items visible on a player character always have a style, which can be collected by equipping them.

Unattuned Gear was the first step towards giving the player more choice over the loot.

In contrast to Attuned Gear it has a fixed Item Level and fixed stats, but will attune to the current player character's role, thus providing a choice whether it should be used for the damage or for the support role.

Elite Gear was introduced alongside elite content such as elite raids and elite alerts.

Up to the Amazon Fury Part III episode it dropped exclusively as loot from elite content, but was then put onto the episode vendors due to an overall change in the game. The first style sets also available as elite were Ancient Amazon Noble for heroes and Ancient Divine Sorceress for villains. Per episode (cycle) there is one costume set with an elite version.

For the elite gear to become available at the vendors player characters need to collect renown tokens from the episode's elite content.

R&D Gear is any gear which can be produced through the process of Research and Development. It has been mostly obsoleted by the introduction of augments.

Attuned Gear is gear which attunes to the player character's combat rating within its item level range. It mostly is distributed through gear boxes.

A gear piece with a minimum item level of 10 and a maximum of 172 will have different stats if used by a player character with CR 53 as if by one with CR 180. The gear's item level would be about 1-3 levels higher than the weighted average of all your highest gear, depending on the attuned gear's rarity. For example, the CR 210 Advance gives you gear in every slot at level 183. At this stage, green attuned gear would give you level 184, blue would give you level 185, and purple 186.

Attuned gear that is not picked yet does not contribute to your combat rating. To progress in CR most efficiently, you should always open attuned gear in a slot where the piece of gear you currently have is at the lowest level compared to your other gear (e.g. if you have attuned gear of every type and your current chest item is level 98 while all your other equipment is level 100, you should open the chest one first).

Opening an attuned gear box will always offer a choice of the resulting piece in damage and support role, no matter which role the player character is currently in.

Since the House of Legends episode most gear styles, formerly bound to specific content and tier, randomly drop with a generic item level.

The generic item level is currently set to 290.