The GCPD Blimp of the Gotham City Police Department is a surveillance dirigible utilised by the GCPD to survey over Gotham City as crime detectors and deterrents.

Outfitted with radars, radio broadcast systems and search lights, the dirigibles assist in suspect pursuits and car chases by providing an eye in the sky to help direct police forces during the chase.

It then repeats this. 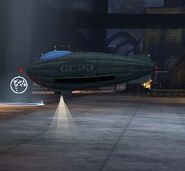 Toy from the Marketplace
Add a photo to this gallery

Retrieved from "https://dcuniverseonline.fandom.com/wiki/GCPD_Blimp?oldid=238953"
Community content is available under CC-BY-SA unless otherwise noted.