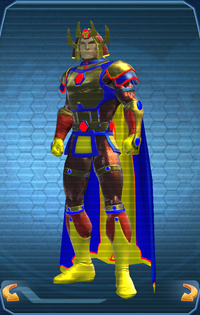 Furious is an Iconic Battle Suit for heroes only which is also available in an Elite version.

Consisting of eight pieces, the set is an advanced PvE (Player versus Environment) gear set inspired by the vestments of Big Barda.

This set has Item Level 110 and is obtained as loot drop from the tier 7 raids Happiness Home (elite) and New Genesis Now. A minimum PvE Combat Rating of 111 or above and the Halls of Power Part II episode is pre-requisite of obtaining this gear.

It also drops as attuned gear in Birds of Prey (Episode) content. 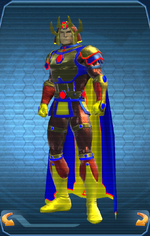 The Furious' overall color-scheme consists of three colors that can be chosen by the Player in the Style Window. Specific sections of the style's pieces can also be allocated a more specific colour by the Player.

Retrieved from "https://dcuniverseonline.fandom.com/wiki/Furious?oldid=266428"
Community content is available under CC-BY-SA unless otherwise noted.