Fortress of Solitude: The Chasm 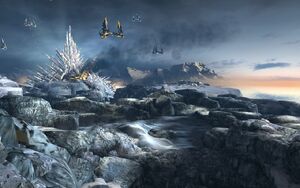 With the access teleporters in flux and the air around the fortress filled with Brainiac ships, the combined forces of the Justice League of America and the Secret Society of Super-Villains are forced to approach the fortress' outer limits via the Atlantic underground chasms.

Talk to Superman, then follow him. Try not to stray from the path or you might be hit by the orbital bombardment of the Brainiac ships, which usually hits 1500 to 2000. Superman would use Heat Vision to blast open an underground tunnel to the Fortress.

Then, just continue through the tunnel where there is a lot of mobs, just take them out then you find a fairly small outer terrace with a Brainiac Machine, prompting to be activated. Once activated, a boss appears. The first boss is the Sunstone Herald. He summons hordes of dwarf mites and various sun crawlers, and it seems to have a special attack that deals 2000+ damage in melee range, but is fairly manageable. After some time, he will absorb the sunstones around him, creating itself a sunstone armor. The armor used does not really make the fight much harder, just that the Herald will take lesser damage. At low health, it would return to the edge of the chasm where Superman appears and helps finish him off. Sometimes the Herald would get stuck and Superman does not appear, causing the Herald to take no damage. If the fight takes too long, it would enrage and instantly KO your team.

After the Herald battle, continue going to the path where there will be another machine which is the second out of the four needed to be activated. Keep going for the third machine. Then, continue, until there is some kind of sunstone stairs to reach a high platform where, there is the fourth machine. Make sure the group is ready for the boss. If so, activate the last machine. The second boss is the Sunstone Broodmother, which is quite possibly the hardest fight of this raid. The Broodmother is surrounded by a shield that prevents all damage. Players must kill the slow-moving sunstone retrievers when they start coming. They will drop a sunstone that must be transported to the Broodmother. After a number of sunstones are used on it, the shield vanishes. However, if a sunstone retriever reach the Broodmother and back to the edge of the battlefield, it will summon a damaging sunstone sentry in its place. Also, the players will come under heavy fire from sunstone turrets and Brainiac Sun Guardians, the latter of which is programmed to target healers, so watch out. Always focus on the retrievers as they will be the root of failure in this battle. The first Sun Guardians will not do significant damage, but if group keeps letting them spawn, it will be a sure wipe.

Continue to a tunnel opened by Superman (you get a prompt to speak to him, but if there is no such option, simply take the path to the north from the Broodmother boss area and he will follow). You will meet Lex Luthor. He is seen fighting a scorpion-like sunstone creature which will be the third boss, Scorpionod MK-1, which is a relatively straightforward fight. Other than that it often grabs a single player with its tail and throwing them dealing heavy damage, occasionally burrows underground and bringing down many sunstones, each of which would spawn a burrower if not picked up and smashed.

The final boss is ironically the easiest of all. Controlled by Brainiac, Krypto attacks the players alongside the Sunstone Domineer. While the player could destroy the pillars to free Krypto, it is not recommended as the Sunstone Domineer is easy to defeat and doesn't have any tricks. The Domineer only uses some melee and ranged attacks. His special move does not really hit hard. If you do not free Krypto, the feat "I'm not a dog person" will be unlocked, worth 25 points.

Similar to Fortress of Solitude: Sunstone Matrix, The Chasm can also be feasibly soloed even by a free player, although it is harder (250+ CR recommended) than Sunstone Matrix and takes longer. The Sunstone Broodmother fight could be quite frustrating due to being constantly knocked down and trapped by the sheer amount of mobs. The Scorpionod would encase you a lot because you're the only target, but is not much of a threat otherwise. 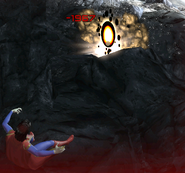 A player being damaged by the Brainiac ship's aerial bombardment.