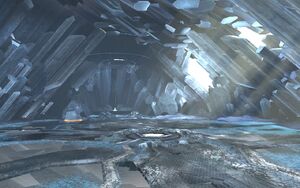 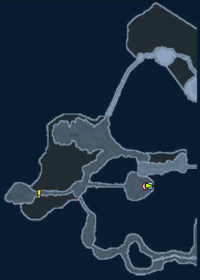 While this raid shares part of its map with Fortress of Solitude: Power Core, only the direct path to the Matrix, marked by the ! mark, is accessible.

The Sunstone Matrix is, by far, the shortest of the three Fortress of Solitude raids, but it could be very difficult if the players are not paying attention.

The raid is basically a single long boss battle in an enclosed chamber. There would first be a few waves of soldiers (several of each of infantry, sniper and medic) while Non, Ursa and Zod cannot be attacked as they are behind a forcefield.

The medics are the most dangerous of the three. They have a special attack in which they surround themselves in a red aura, and blast out energy waves after a few seconds if they are hit by a weapon attack, dealing extreme damage (over 3000) to all targets in a fairly large area. It is recommended to dodge immediately once the red aura appears - there is no overhead dangerous attack icon. Alternatively, some weapon combos can disrupt this attack. When medics glow green with a hand up in the hair, use an interrupting weapon attack to stop them from healing other enemies.

After a few waves of soldiers have been defeated, Non joins the fight. Occasionally, two sunstone guardians along with a random soldier (medic, infantry or sniper) would spawn. Deal with them first or they would stack. Red sunstone guardians shoot fireballs that deal moderate damage, while yellow ones have a powerful stomp attack, but they don't have much health and should be quick to take down even from a distance. The pattern is continued for Ursa and Zod. Ursa would attack when Non is defeated, and Zod would attack when Ursa is defeated. The fight against the three kryptonians are actually easier because less medics appear.

While there are separate loot for Non, Ursa, and Zod, all three only are awarded when Zod is defeated. If you defeat Non and Ursa and fail to defeat Zod, you will not receive any loot and must start from the beginning.

This raid can feasibly be soloed with 200+ CR (even as a free player). At this level, the Medic's energy blast is much less of a concern, although the yellow sunstone guardians's stomp attack can be quite a nuisance as they frequently knock over players.

When General Zod is KO'ed, all Sunstone Sentries automatically disappear, but any kryptonian soldiers will remain.

For players within the 53-79 CR range, this raid always awards 10 Marks of Victory (apparently automatically added to loot in the form of 2 for Non, 2 for Ursa, and 6 for Zod, but it is not possible to not loot all 3 at once). Additionally, Non, Ursa and Zod all have a Loot Picker drop - all 3 of them always offer a choice out of at least 2 epic weapons and 1 Mark of Victory, each (i.e. you can walk away with 3 weapons, 3 marks, or a combination thereof). Therefore, the maximum number of weekly marks obtainable from this raid is 13.

For players over 79 CR, they do not receive the 10 base marks, but they do get the option of the same 3 possible marks from Loot Picker weekly. Due to the short time it takes to solo this raid compared to most other low level raids, it can be a decent option especially for very high CR free players with limited options to gain marks.