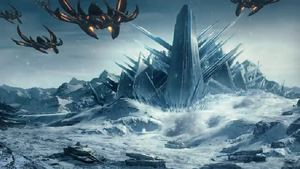 The Fortress of Solitude is an occasional headquarters and sanctuary for Superman; serving as a place of refuge for him and his family away from the eyes of the public.

Superman, on a self-imposed exile to space, was entrusted with a Kryptonian artifact called the Eradicator. Dedicated to preserving Krypton, this device built a new Fortress in the Antarctic as a precursor to recreating Krypton on Earth. Superman broke the Eradicator's control, but maintained the Fortress as a useful location to retire to in emergencies.

The Fortress was originally destroyed when the Eradicator, having became the self-styled "Last Son of Krypton" following Superman's battle with Doomsday, forced the entire energies of the Fortress within his body in order to take vengeance against the Cyborg Superman, only to be rebuilt later. The Fortress was cast into the Phantom Zone as a result of a battle between a manipulated Superman's attempt to rule the world, Lex Luthor, and Dominus, the location ravaged when LexCorp Tower, transformed into a Kryptonite missile, was launched there. The fortress was rebuilt by Steel, using a Spectral Nexus Apparatus to gather metaphysical traces of the destroyed Fortress, the "trace singularity" was transferred to an inter-dimensional portal called a "tesseract" for Superman to enter and leave at his whimsy.

During an attempt by Superman to locate people who have been vanishing across the globe, Wonder Woman breached the Fortress in an attempt to confront him, causing the Fortress to self-destruct. Superman subsequently established a new Fortress in an ancient temple on a remote village in the Cordillera Del Condor Mountains, on the border of Ecuador and Peru.

Following the Infinite Crisis, Superman recovered a piece of Kryptonian sunstone. Learning that the sunstone had been sent with him from Krypton, Superman used it to construct a new Fortress in the Arctic. The temple Fortress was revamped into a tourist attraction.

In a future where the conflict between heroes and villains has escalated to war, Batman pulls back to the Fortress of Solitude following the death of Superman and his own "resurrection" as a cyborg.

Using the Fortress' computers he formulates a plan to use one of Rip Hunter's time portals to send the Exobytes stolen from Brainiac by Future Lex Luthor to the past before the war where an opposing force could be created to combat Brainiac's invasion. Unbeknownst to himself, Luthor had been manipulating him to formulate just such a plan; stealing the Exobytes and leaving Batman to fight Brainiac as the latter breaches the Fortress. Luthor causes the Fortress to self-destruct right before stepping through a portal to the past.