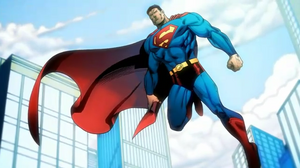 Chosen during Character Creation as a character's Movement Mode, Fliers soar over the skyscrapers, swooping down to engage their enemies with devastating attacks. There is no place out of reach for fliers, who are able to traverse any environment with ease. Those with Flight movement have their own special combat moves designed to stun enemies or knock them senseless. Using the environment around them, fliers can turn almost anything into aerial projectiles to defend the innocent or destroy the city.

Characters can enter flight mode by either pressing "F" on the keyboard or by holding the Space bar. Characters may fly wherever you would like, but there is a maximum altitude which is slightly higher than the tallest buildings. When the character hits the "ceiling", the player's vision will be blurred by clouds.

At level 9, Flight character receive the ability to "Super Sonic", where the character flies much faster than the default speed, but they are unable to attack in this mode and taking damage disables it temporarily. Super Sonic can be enabled by clicking "NumLock" on the keyboard.

Flight has 2 skins. One skin is normal (Original) and uses the same animations as Superman, Green Lantern & Black Adam. Another Skin that was released late 2014 is based on Mister Miracle, and allows players to fly in style with 2 discs under their feet. The new skin is called Skimming.

Skimming is for free to players that have subscribed to a membership and have the flight movement. If players do not have flight as their movement, they'll have to purchase a movement change token as necessary.

Using Insectoid Form from the Nature power set will change your movement mode to flight.

Streak through the skies and swoop down on opponents.

A player in flight. 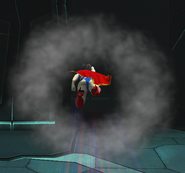 A player breaking the sound barrier.

The effect of landing from a sufficient height.

A player swimming in Atlantis.