"If we can destroy the catalyst they're using to create Greek Fire, we can gain a battle advantage. Once you've completed that, we'll take the fight to the sky." — Wonder Woman

Fire and the Sky

Rebel camp in Gotham Under Siege

Rebel camp in Gotham Under Siege

Fire and the Sky is one of the daily missions in the Warsmith Celandine's Missions set. It requires a combat rating of 100 and the Amazon Fury Part I DLC.

Wonder Woman needs you to confiscate Greek fire supplies from Queen Hippolyta's forces. Once that is complete, you will speak with a wise alchemist in order to prepare yourself for an aerial assault on the enemy.

*Not a direct enemy, but possible encounter 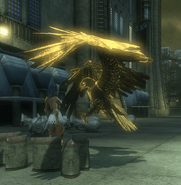 Restocking Greek fire
Add a photo to this gallery
Retrieved from "https://dcuniverseonline.fandom.com/wiki/Fire_and_the_Sky_(Heroes)?oldid=196479"
Community content is available under CC-BY-SA unless otherwise noted.