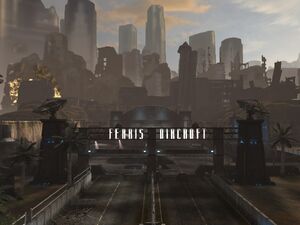 Ferris Aircraft is an aviation corporation located within Coast City.

At the forefront of aviation technology for decades, Ferris Aircraft specializes in advanced aviation concepts. The facility employs hundreds of people in the Coast City area and was founded by Carl Ferris. Ferris' daughter, Carol Ferris, is the current CEO of the business.

In the facility's early years, faced with the alcoholism and irresponsibility of his partner Carl Bloch, co-founder Carl Ferris was forced to remove his friend from the company in its early days. Years later, after Ferris had left most of the day-to-day maintenance of the company to his daughter, Carol Ferris, the company skirted dangerously close to bankruptcy. In years to come, Ferris would be plagued by saboteurs and the cancellation of its government contracts, a devastating attack by the Demolition Team and a hostile take-over, among many other setbacks. It was also one of the funding powers behind the Conglomerate. In recent times, Carol Ferris has regained control of the company and Ferris Aircraft's recent achievements include their contribution to the new Blackhawk squadron and the launch of FerrisAir, a commercial airline service.