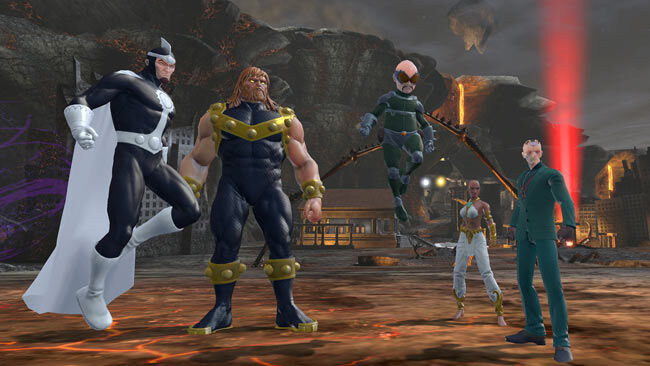 The Fearsome Five are a group of villains that seek to eliminate the Teen Titans.
Doctor Light, seeking a way to rid himself of the Teen Titans once and for all, came up with this genius plan. He would place an advertisement in a criminal newsletter looking for other evil doers to help him in this mission. Psimon, Gizmo, Mammoth, and Jinx were the villains that rallied to his cause.

Objective: Eliminate the Teen Titans!
Dr. Arthur Light is the founder of the Fearsome Five. He has the ability to freely manipulate light and take control of anything that gives off light. While he is a persistent foe to a variety of heroes, he assembles the Fearsome Five with the goal of eliminating the Teen Titans. His villainous career has been full of humiliating defeats.
Will DLC 8: Sons of Trigon be Dr. Light’s lucky day?

What do you say when an interdimensional phone rings, and Trigon is on the other line?
Before he was Psimon, he was known as Dr. Simon Jones. Simon was a scientist experimenting with technology that would allow him to communicate with other dimensions. In one of his experiments, he was able to make contact with the inter-dimensional demon lord, Trigon. Transforming Simon into Psimon and granting him powerful telepathic and telekinetic powers, Trigon seeks to use this not-so-good doctor to aid in the destruction of Earth and its heroes.
Will Psimon be the reason that Trigon gets what he wants?

Everything is a weapon when you’re holding it right.
Gizmo has the incredible ability to turn ordinary machines into powerful weapons and devices! Also known by the name Mikron O'Jeneus, Gizmo is a brilliant dwarf with an extraordinary knowledge of computers and technology. He solves complex problems for the Fearsome Five, often with everyday materials that can be found on hand. During his villainous career, Gizmo has had a number of conflicts with the Teen Titans.
Will working with the other members of the Fearsome Five give Gizmo the edge he needs to overcome his adversaries?

So much smash, so little time.
Mammoth, also known as Baran Flinders, is a towering behemoth of a man with immense strength and incredible durability. Unfortunately for him, he is not the sharpest tool in the shed. He’s big and strong, but he’s not very bright. He lacks any formal fighting training, and generally just resorts to smashing anything and everything that stands in his way.
Will you proceed with caution, if you bump into Mammoth in the Gotham Wastelands?

Be cautious when tempting fate.
Jinx is a sorceress with the ability to manipulate magical energy and dissolve matter. Her real name has never been revealed, and she has a history of allying herself with a variety of heroes and villains depending on what benefits her the most. In addition to working with the Fearsome Five, Jinx has a history of working with Circe to clash with Wonder Woman and her allies.
Where do Jinx’s true loyalties lie?

Quintuple your trouble with the Fearsome Five!
Individually these villains are a menace to those heroes that cross their paths. Together, they become a huge threat to the Teen Titans and every other hero that they turn their attention to.
Do you dare play a hero knowing that the members of the Fearsome Five will be just a few of your foes throughout Sons of Trigon? Or is it better for you to play a villain and fight with them as your allies?