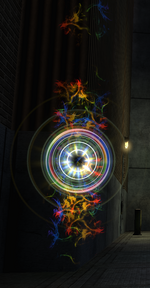 An Exobit are the remains of an Exobyte that has deteriorated over time.
Much sought after by scientists, an Exobit can be used to reform an Exobyte and, by extension, help to enhance and modify equipment through the use of Research and Development.

A hidden update in October 2012 seems to have greatly boosted the chance of finding an exobit source.

Exobits can be found in Gotham City, Central City and Metropolis the form of a glowing sphere. Once interacted with, the sphere disappears and releases one, two (uncommon), or three (extremely rare) random exobits. Exobits come in three different varieties. The rarity is more or less equal.

It takes 8 exobits to form a full Exobyte at a Research and Development table. Different mix of exobits give different variety of Exobyte.

It is possible, albeit extremely rare, to receive a complete exobyte from an exobit source.

Player must be at least level 10, and have completed the Research & Development mission to obtain the plans for the six types of exobytes, although exobits could be gathered before that.

Exobit sources appear in fixed locations, but as there are so many possible locations camping is generally inefficient. One exception may be the Cape Carmine Lighthouse, which has several spawns in close proximity. The spawn rate seems to depend on the amount of players in the area.

Fliers would benefit from keeping a low altitude as it would allow them to pick up far more exobits in their travels.

A hovering exobit ready to be collected.

Gathering three exobits at once.