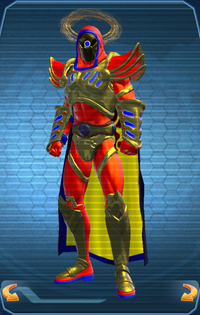 Exalted is an Armor Style Set.

Exalted is an armor style made in the appearance of the Blessed Celestial Powers. It drops in the Raven bounty for Villains and is obtained as a reward from the extra level boss' in T5 duos for Heroes. It also can be obtained from the Chit of Exaltation's Rewards which might be contained in the Exalted Reward Box.

The armor has an Item Level of 85 and players require a Combat Rating of 84 to wear it.