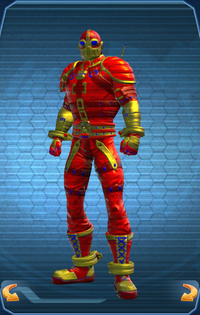 The Escaped Inmate is a Costume Style Set for heroes and villains.

Consisting of eight pieces, the set is themed after the prisoner containment suits of Arkham Asylum.

This set has Item Level 74 and is obtained as reward for doing the Second-Generation Morrowbot bounty (heroes) or the Make Them Mad mission (villains) of the Home Turf episode. A minimum PvE combat rating of 70 or above and the Home Turf episode are pre-requisite of obtaining this gear. 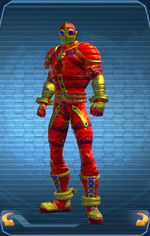 The Escaped Inmate's overall color-scheme consists of three colors that can be chosen by the Player in the Style Window. Specific sections of the style's pieces can also be allocated a more specific colour by the Player.