The Dark Robins are a group of feral, cannibalistic, Jokerized children from Earth -22.
Enslaved by The Batman Who Laughs, the Robins are usually kept on chain-link leashes ready to be unleashed at a moment's notice by their master.

On Earth -22, in an effort to drive Batman insane, the Joker temporarily paralyzed the hero and forced him to watch as he recreated the Wayne murders on a long line of captured children and their parents - shooting each of the children's parents and then infecting the orphans with an incurable strain of Joker Toxin.
After Batman had broken free and killed the Joker, he collected all of the infected children and had them kept together in an effort to find a cure. However, because Batman had been exposed to a toxin released upon the Joker's death, he slowly started to become the new Joker himself and soon re-purposed the Jokerized children as his new pets - dressing them up in Robin costumes and training them to listen to his commands. 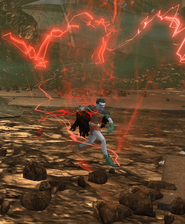 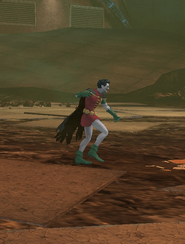 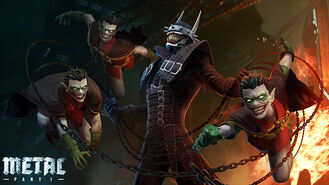