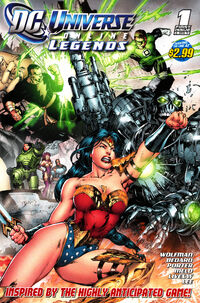 First debuting with a promotional issue given out during 2010 North American gaming conventions, the main series debuted on February 2, 2011, as an expansion of the story of the DC Universe Online game.
Intended to run for 26 issues, the series will be released with two issues each month; one during the opening week and one during the closing week.

The series is written by Marv Wolfman, the co-writer of the DC Universe Online story, along with Tony Bedard.

While the game, and consequently the comic, shows a DC Universe largely similar to the post-Flash Point New Earth DC Universe, with certain key events from the mainline DC Universe still referred to as history in the world presented in the game; including the Crisis on Infinite Earths, the Death of Superman, No Man's Land and the Breaking of the Bat, various instances of the narrative and the presence and state of certain characters diverge from in-publication canon, making the game and comic series exist in an alternate timeline from publication.

The comic series itself also diverges from the game timeline in that, in the comic series, Lex Luthor does not travel from the future to give civilians superpowers through Brainiac's exobytes; as is the premise of the game's timeline. Thusly the universe presented in DC Universe Online: Legends is an alternate future/timeline from the DC Universe Online game universe showing how things would have potentially played out had Luthor not arrived and released the exobytes.